For many years after he lost his battle with cancer, I would awaken from a dream uncertain whether the dreamed interaction with the Governor was real or imagined.  After the positive influence of my parents,  Cyril Emanuel King was next in line to shape the professional I am today.

Born in 1921 on St. Croix, Cyril King returned to the Virgin Islands after his military service in Hawaii.  In 1947, he enrolled at American University in Washington DC to pursue a Bachelor’s degree in Public Administration.  There he met Senator Hubert Humphrey of Minnesota who invited him to work on his staff at the US Senate-  a notable accomplishment for a person of color in the years  post-Civil W 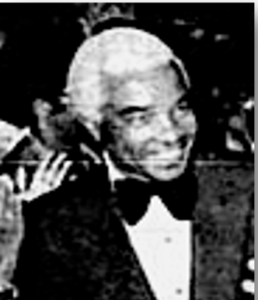 ar reconstruction. Among other responsibilities he was ultimately tasked with spearheading research for the Special Committee on Disarmament which Senator Humphrey chaired, and represented the Senator at the Disarmament Conference at Arden House, Harrison, New York. He also pursued post graduate studies in government, public administration and political science.

While working in the nation’s capital, Cyril remained connected with Virgin Islands political thought and development.  In 1957 the Organic Act Committee of the Virgin Islands legislature appointed him as its deputy in Washington to secure congressional action to amend the revised Organic Act, the “constitution” of the US Virgin Islands.

Washington offered the opportunity to engage with other Virgin Islanders who over time returned to the territory and assumed leadership roles in local government and politics.  He and those individuals would shape Virgin Islands politics through the decades of the sixties and seventies and lay the foundation for the past fifty plus years of Virgin Islands development.

Cyril King returned to the Virgin islands as Government Secretary  in 1961, a post equivalent to that of the present Lieutenant Governor,  through an appointment made by President Kennedy. He then served as Acting Governor of the Virgin Islands following the resignation of Governor Ralph Paiewonsky in 1969.

In the late sixties and early seventies King offered a more reformist version of local Democratic Party politics in the Independent Citizens Movement party he founded. In so doing he challenged the hold the Democratic Party had on local politics .

In 1970, his effort to be the Territory’s first elected governor contest failed.  The General Election  was a three-way contest between Melvin Evans the Republican candidate, Alexander Farrelly, the Democratic Party candidate and Cyril King running as the Independent Citizen Party candidate.  King and Evans emerged as the leading vote-getters.  In the subsequent run-off, King was unable to convince enough Democratic Party voters to support his candidacy to triumph over his Republican opponent.

Cyril King and Me

I first met Cyril King when I was fourteen, in the seventh grade.  He was then  Government Secretary of the US Virgin Islands.  Fourteen years later he offered me the opportunity to serve as Budget Director for the Virgin Islands following his election as governor.

After graduate school in 1971 I returned to the Virgin islands and worked in the Office of the Budget Director as part of a nascent analytic team that sought to statistically document the demographic and economic changes of the 1960s and early 1970s. Bruno Neuman helmed the group under Magdalen Bryan who was the Budget Director.  Data aggregation and analysis was of particular importance.  It provided information that allowed challenging the 1970 census count that was particularly flawed because of the substantial in-migration the Territory experienced in the late sixties and early seventies.  The resulting product allowed presenting a case to federal agencies for increased grant-in-aid funding, which was often based on population.

In this new position, Cyril and my paths again crossed.  He was elected to the Virgin Islands legislature in 1972.  Representing the Budget Office at legislative hearings,  Senator King would question me on the Administration’s spending priorities.  To me, these interactions were memorable. Never hostile or condescending the Senator made his points in the way he asked questions and solicited information rather than through political posturing.

I relocated to the New York area for a job in private industry.  King continued to solidify his popular base and the appeal of his new political party.  In 1974 he was elected the Territory’s second elected governor.  I was completely surprised but quickly accepted his offer to return to the Virgin Islands as the Territory’s Budget Director.

The Governor hired and allowed hiring based on competency rather than political, personal or local connection.  Agency leadership positions were not ‘rewards’ for political support.

He was self-confident, and self-assured.  The Governor respected that his managers might have deeper knowledge on a given subject matter.  His staff’s successes were not viewed as detracting from him.  He encouraged informed risk taking aware that there would be success and failures.  Both would advance his agenda.  Lessons were learned regardless of the specific outcome. For those of us long on academic preparation but short on real world experience he was a leader who allowed us to explore alternatives without concern that we would be subject to  non-constructive criticism.

The Governor was not reticent to make his positions known but he invited discussion around the best way to achieve the desired end result  consistent with best governance practices.  Agency managers were expected to assume leadership on subject matter within our respective portfolio of responsibility.  Once opinions and suggestions were thoroughly discussed the Governor made the final decision. Management coalesced around that decision.

He insisted we assume responsibility for decisions made and actions taken.  Errors and mistakes were to be owned and corrected.  Making mistakes did not diminish stature; failure to make the appropriate corrections did.

His successes in dealings with the federal government were in no small part advanced by his understanding of the congressional legislative process as well as knowing or having access to those who could shape federal legislation or influenced administrative action relevant to the Territory.

The revised Organic Act of 1954, the ‘Constitution’ of the Virgin Islands, is a product of the US Congress.  Modification and changes, require congressional action.   The US Congress is effectively a shadow player in Territorial self-governance.

On April 7, 2021, the 100th birthday of Cyril King, many took the opportunity to memorialize his contribution to the development of the US Virgin Islands.  For me, this anniversary day was an opportunity to reflect on the years I spent in his company as well as the mentorship he afforded. This was not just limited to twenty-four months I worked for Governor King but also included the prologue and epilogue of those years.

I reflect on the professional time we spent together; the more personal conversations in his office, on the way to and from a theater performance, sitting on an aircraft in transit to some meeting he invited me to accompany him to, or over an evening  meal while traveling together.  I smile when I think of the detours made to purchase Italian cheesecake in Little Italy in the Canal Street area of Manhattan , which cut way-to-short the boarding time for return flights to the Virgin Islands.

To choose a single word that best describe what the Governor meant to me, the Yiddish word mensch comes to mind.  He was a mentor, friend, and role model.  He believed in my abilities  before I had sufficient experience to professionally believe in myself.

I am grateful for those years together. I  register the measure of his continued presence in my occasional momentary hesitancy when differentiating  which of my memories of Cyril King are real versus dreamed over the intervening years.