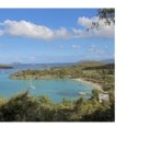 The broken structures of Caneel Bay, the plantation turned resort, raise haunting questions about power, economic justice and the possibilities of freedom in Caribbean islands that are still colonies. Future plans for Caneel Bay should address climate injustice and other root causes.

Caneel Bay Resort Should be Owned by the People